This past weekend I got a little time to sit down with Chris Fasulo, designer of a myriad of titles published through his publishing company, Grognard Simulations. This was the second year that Chris brought his most recent design, Incredible Courage 100 Days: Quatre Bras. Last year he was in the final playtesting phase and this year he is the delivery stage of the completed game. Unfortunately, I didn’t get the chance to sit and really get invested in to the system, but we did chat about the game mechanics, the overall design and what’s next from Grognard Simulations.

This year marks a historical milestone with the 200th anniversary of the Battle of Waterloo and Chris timed the release of his game to coincide with this anniversary. Quatre Bras, the focus of this particular design, we see Marechal Ney versus the Duke of Wellington fighting for control of a crossroads on the outskirts of Bois du Busso. This pivotal battle was helped set the stage for the later (albeit not much later) battles of Ligny, Wavre and Waterloo.

The game really showed how dynamic the battle could be modelled through this game. The front lines on both sides ebbed and flowed quite regularly as I watched the battle unfold over 3.5 days. It was fun to talk about some of the tactics with the game designer and, of course, his opponent, but to see these tactics in action was awesome.

If you have any interest in the Napoleonic era and enjoy what one might call the tactical level during this time period, you owe it to yourself to check out this game and it’s sister games coming out before June of this year. Please note that these games are cheap not or for the faint at heart. These are truly games for the grognards, but that is not to say that it’s not approachable by anyone. Hell, If I read and understand the rules, most anyone else can as well! Anyways, the price for Quatre Bras weighs in at $170, but due to the limited number of games he produces in each batch he can’t get economy of scale to bring down the price. I will say that all components are made in the USA and are very high quality.

Enjoy some of the pictures of the game as it unfolded. 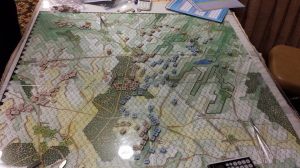 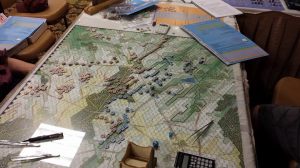