The Call of Cthulhu Role-Playing Game is undeniably a horror game, but it’s also a historical RPG, thanks to the creator, Sandy Peterson, for setting the original game, published in 1981, in the United States during the prohibition era of the 1920s. Other writers for the game have followed suit. Expanding the paradigm by continuing to place their scenarios and settings in historical periods instead of alternate realities or out right fantasy worlds.

One particular historical era that has seen a rise in popularity in the last few years is the Second World War. Two publishing companies Modiphius and Cubicle 7 have dedicated product lines indulging the war hungry Call of Cthulhu Keeper. In the summer of 2014, it came as little surprise when Pagan Publishing entered the battlefield of historical war settings when they announced Horrors of War. But unlike Modiphius and Cubicle 7, Pagan Publishing chose to focus on a different conflict. A war at times overshadowed by World War II, The Great War.

Let it be noted that there is only one other published supplemental book dedicated to The Great War, No Man’s Land written by Sam Johnson and published by Chaosium in 1998. No other published material has placed player characters on the front lines in The Great War as military soldiers facing atrocities greater than the horrors already being witnessed on the battlefield. At a time when war themed supplements were gaining in popularity, Pagan Publishing recognized the lack of published material in this era and sent their writers over the top to hold this new territory. Adam Scott Glancy and John H. Crowe charged forth bringing seven years worth of already developed scenarios set in The Great War.

Horrors of War, currently unpublished, is a series of supplemental books that will contain scenarios and source material, all set during the Great War, 1914-1918. A Kickstarter was launched on August 1st, 2014 for the first book in the series “A Covenant With Death”. The Kickstarter has not come to fruition and it has long passed it’s expected publishing date. Though the book series may not yet be published there are many different sources in which we can learn what these series are destined to be.

Our main source of intelligence comes from the Kickstarter itself “Horrors of War: A Covenant With Death”. This is slated to be the first in the book series and will feature a general history of the Great War, eight scenarios, information on weapons and gear of the time, Air-combat rules, rules for creating both professional and citizen soldiers, a Great War timeline, and a glossary and bibliography. The physical book itself will be a letter-sized four-color glossy front and back cover with black and white interior pages. The first book will be written for Call of Cthulhu 6th edition. There is no mention that the later books will be written for 7th.

The Kickstarter successfully ended after 60 days of funding, reaching two stretch goals. The first stretch goals added a two-page foldout diagram of a Zeppelin for one of the scenarios in the book. The second stretch goal was a backer exclusive preview of the next in installment in the Horrors of War series, “Death From Above”. “Death From Above” will include additional scenarios, air combat rules, and aircraft templates.

The eight scenario for the first book, “A Covenant With Death”, were not revealed until a couple months after the Kickstarter ended. The writers of each scenario did their very best so players could choose nationalities that were represented in the Great War. The scenarios could handle British, Belgian, French, German, Russian, American, Italian, Austro-Hungarian, Czechoslovak, Portuguese and Serbian characters, with Romanian, Bulgarian and Turkish options still in development. The scenarios that will be appearing in that book were shared in project update #6.

Bolt from the Blue (Gallacian Front 1914): They players are Imperial Russian Cavalry troopers who encounter a terrifying new weapon in the opening weeks of the war. New forms of death are expected in wartime, but could something this inhumane truly be inhuman?

Under False Colors (Tsingtao China, 1914): The players are Imperial German Seebattalion soldiers who are assigned to escort a ship loaded with civilians fleeing the Japanese siege of the German treaty port of Tsingtao China. Between dodging Allied warships and opportunistic criminals, the greatest dangers will prove to be the ones they invited on board their ship.

Lord of the Peaks (Italian Alpine Front 1916): The players are Italian Alpine troops assigned to take possession of a winter observation post that another team has just finished dynamiting out of the gray rock of the Dolomite Mountains. The avalanches, frostbite and Austrian snipers will soon be seen as mercies compared to what awaits them.

The Uncorrupted (Greek Islands, 1916): The players are allied soldiers, Serbians, French and British, assigned to locate and return to duty the thousands of Serbian soldiers marooned on hundreds of Greek islands. Many evacuation ships dumped their Serbian passengers onto the nearest Greek island at the first sign of fever. Unfortunately worse things than Cholera came out of the Balkans.

Dig for Victory (Western Front, 1917) The players are soldiers of the British Commonwealth, assigned to a tunneling company outside Ypres, Belgium. the players are digging underground, struggling in near total blackness to plant almost a million pounds of explosives beneath the German trenches. But new orders send their company digging away from the Germans. What could HQ be interested in 300 feet below the surface of No Man’s Land?

U Boote Heraus (The Mediterranean, 1917) The players are the crew of a German U-Boat operating out of the Austro-Hungarian naval bases in the Adriatic. While patrolling the Mediterranean, intercepting Allied and Neutral shipping their U-boat encounters an implacable enemy of all mankind. Only too late do they realize that their clear course of action may have only fed a greater evil.

The Night Mission (The Inzonzo Front, 1917) The players are air crews piloting warplanes from either the Allies or the Central Powers. While executing a night mission over the Italian Alps these aviation pioneers learn that there are things that have called the cold, empty skies their home since before the first human ever turned their face towards the heavens. And they do not appreciate intruders in their domain.

The Last Flight of the L58 (Germany-Bulgaria-Persia 1918) The players are the crew of the Imperial German Zeppelin L58. They are on a mission to deliver supplies to anti-British tribesmen in Persia and to rescue German POWs who have managed to escape from the chaos of the collapsing Russian Empire. But something’s not right. Is there a saboteur aboard, or is it something far more foul?

Other intelligence was gained by sifting through the Kickstarter updates where a list of artists slated to work on the Horrors of War project. Spanning several updates backers are treated to several sketches and final pieces of art illustrated by the very talented artists working on the project. I’ve chosen a few to share here but I encourage readers to view the others that are shown in the updates. Art updated can be seen between “Update Number 14 – Horrors Take Shape” through “Update Number 23- Not Over by Christmas”. 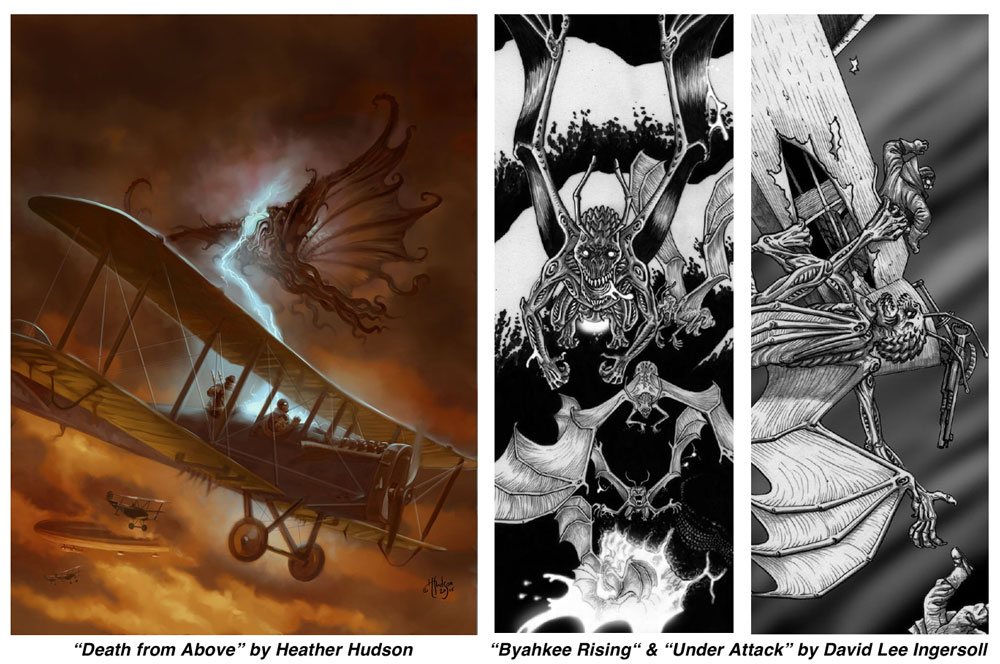 Our last bit of insight into Horrors of War comes in the form of actual play recordings. Several audio recordings were produced, some before the Kickstarter and some after. Keep in mind some of these were recordings of playtest scenarios. Those scenarios might differ from the ones that will appear in the books. Most of the recording took place at GenCon were Adam Scott Glancy was the Keeper of Arcane Lore. These recording can be found at RPPR, Role Playing Public Radio, through your favorite podcasting download service. Links for each are also giving at the end of this article.

“The Iron Devil” and “The Wounded” will not appear in the “A Covenant With Death”. The summary from RPPR Actual Play website is given below.

The Iron Devil – Allied intervention in the Russian Civil War was a complex and murky affair, but it did result in many American troops being stationed in Vladivostok in 1919. One company of soldiers was given a mission to bring supplies and munitions to allies near the front, which can only be delivered by an armed and armored train. Little do the soldiers know they will encounter more than cagey ‘allied’ soldiers, corrupt officials, and bandits. Something dark and monstrous lurks in the wilds, something powerful enough to prey even on a train filled with soldiers.

The Wounded – The horrors of the First World War did not end on the battlefield for many. Crippling injuries affected countless soldiers and civilians on both sides. In one British countryside hospital, a group of wounded soldiers begins the long journey of coming to terms with their wounds when a doctor offers them a chance at a normal life. The experimental surgery can restore missing limbs and burned skin and safely extract embedded shrapnel. It seems like a panacea for all forms of injury, but how can it possibly work? As the patients consider their options, their dreams grow strange. Their war has ended, but another one beckons…

Unfortunately, as mentioned earlier Horrors of War has yet to be published. The first book in the series “A Covenant With Death” which was Kickstarted has seemed to have stalled out. Some progress has been made toward completing the project but not enough to expect it anytime soon. Many issues surround that Kickstarter which I will explore in my next Rolling Boxcars report. Until then, keep the home fire burning.

The next article in this series will lay out the chronology of the Kickstarter campaign and the current state of the project.

Sources:
Horrors of War: A Covenant With Death
https://www.kickstarter.com/projects/460966263/horrors-of-war-a-convenant-with-death/description

Actual play of “Dig to Victory” from RPPR website
http://slangdesign.com/rppr/category/actual-play/page/9/

Actual play of “Lord of the Peaks” from RPPR Actual play website
http://actualplay.roleplayingpublicradio.com/category/systems/call-of-cthulhu/page/7/

Actual plays for “Last Flight L58” and “The Uncorrupted” at RPPR Patreon
https://www.patreon.com/posts/bonus-actual-of-6526581