I recently came across an interesting looking post in one of the many Facebook groups I belong too and the post invited readers to have a look at a preview of a soon to launch Kickstarter. Always wanting to stay up-to-date with the latest and greatest, I followed the link to what I would learn was the Kickstarter page for Seeds of Wars. Giving the campaign a once over, I was intrigued by the idea of a game product that purported to allow me to manage, at the macro level, a part of the world within any fantasy themed roleplaying game. While not a wholly new idea, the way they purport to do it interested me. Being intrigued, I reached out to Nicolas Nayaert, the designer and project lead and the following interview is the result of our continued conversations. If you have any questions about the product, please comment below and I will make sure Nicolas is aware of your question so you get a prompt response.

RB: Before we get into the heart of the interview, please take a moment to tell us about you and your team of creative folks who are working to bring Seeds of Wars to gamers.

NN: My name is Nicolas. I am a 41 years old software developer living in Belgium and a huge RPG fan since the age of 9. The other developers are all colleagues of mine. Erik Scott de Bie, the lead writer, was one of the speakers at the last Gen Con, that’s how I got to know him. All the other writers were recommended to me by Erik or other big names in the Industry. I also work in close relationship with Flash Raccoon, a design and marketing company that helped me a lot setting up the Kickstarter campaign.

RB: What inspirations, directly or indirectly, are you and your team drawing from?

NN: Many people oppose new technologies and role-playing games. I want to combine the best of both worlds. By supporting the Game Master with a web application, we allow the GM and the players to spend less time doing bookkeeping and calculating complex difficulty checks so they can focus on the fun part. Our main inspiration for SOW is an old D&D campaign setting that is no longer edited since 1998. The game designer, Bryce Whitacre, and I were very big fans of that setting. It gave us our best RPG memories and we want to give a new life to the concept of realm management.

NN: I think most of us don’t handle the passage of time simply because we don’t need to. When you go on an adventure with your character, it usually doesn’t really matter how long it takes. No-one is waiting for you back home. In SOW, each player can only perform one realm action per month. One of these actions is going on an adventure. However, you don’t have to count the exact number of days. Whenever the players decide to go on an adventure, you just assume they’re gone for a month.

RB:  Seeds of War focuses on the macro level, and while this honestly intrigues me, what kind of research have you conducted to ensure macro level management is what gamers want? I imagine that this will appeal to some, possibly many, but what has your research shown?

NN: We are not the first ones to create some kind of macro-level management system. Pendragon, Ars Magica, Pathfinder: Ultimate Campaign and more recently Strongholds & Followers for DnD 5E all deal with the concept of players having more responsibilities than just staying alive. I think that with their character becoming more and more powerful, most players naturally feel the desire to build their own domain. We simply take it one step further and put the characters in that position of power from the start. We also put the focus on the realm management so it becomes more than just a way of spending time between adventures.

RB: Your online application, which is integral to Seeds of Wars, will it be available to gamers offline for those times that internet access is not available to them? If not, is this something that might be in the works?

NN: Considering that all campaigns are hosted on our servers, playing offline is not really an option. However, if for any reason you don’t have internet access you can always play SOW without the application, the traditional pen & paper way. Besides, nowadays most of us have permanent access to a network and the application will not require a lot of resources. If for any reason the web application would go down or if you decide not to use it anymore, you will be able to download all campaign data at any time

RB: The realm management rules are independent of an RPG system but wouldn’t there still be a crossover between the two? A player character could possess a magical advantage, pertinent skills of diplomacy, economy tilting wealth from adventuring, or an artifact within the RPG ruleset that can aid with their rule. How would the two mix?

NN: SOW will feature a small set of skills like “Administration” or “Strategy”. If your game system already includes these (or similar skills), it’s up to the Game Master to use them. Otherwise, you just add these skills to your character, independently from the rest of your character sheet.

Wealth earned from adventuring can be converted and added to the players “wealth pool”. Artifacts that have an impact on ruling will be described in the book and in later supplements, along with battle spells and realm spells.  The usual magic items and spells normally cannot affect an entire realm.

RB: “We have completed several successful Kickstarter campaigns and have solid experience in the field.” From the looks of it, this is your first Kickstarter. What other Kickstarter projects have you completed?

NN: As I already mentioned, I have a partnership with the design & marketing company Flash Raccoon. They have successfully managed other crowdfunding campaigns in the past, although not in the gaming industry. The latest being for a television series named “Open Space Invaders”.

NN: We don’t know what game system players will be using along with SOW and we cannot adapt our game mechanics to fit every possible game system. The idea is to let the players use whatever system they like for character creation and traditional adventures but to use our own game mechanics for realm management. Rolls can be made by the application but if the players prefer to roll dice themselves, they will have to use 20 sided dice. 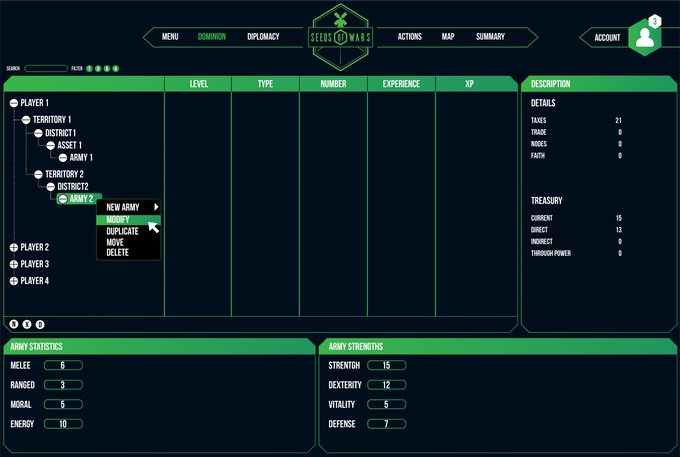 RB: Your Kickstarter page talks about future genre adaptations of Seeds of Wars being created. Can you give readers an insight into your release timetable?

NN: As mentioned in the timeline on the Kickstarter page, the book will be released before the end of June 2019. Any additional setting that gets unlocked via a stretch goal will be released simultaneously. The web application will be accessible to all by the end of Fall 2019 and will include the fantasy setting and any other unlocked setting.

RB: Aside from adaptations for other genres, what does the future look like for Seeds of Wars? Can we expect future developments and enhancements?

NN: The intention is to create a complete product line. We would like to publish kingdom sourcebooks, detailing the different realms, more magical artifacts and spells you can use on a battlefield or on an entire realm, epic villains and so on. We also plan on continuously adding new functionalities to the web application so that it can provide new tools for the realm management aspect of the game such as an interactive map for mass army battles.

RB: For those that travel and attend game conventions, will you and/or your team be demonstrating Seeds of Wars at any upcoming game conventions between the launch of the Kickstarter and the projected release of the product?

NN: We will only start working on the product once the project is funded. Therefore we will not have anything to show before the end of the Kickstarter campaign. However, once the writing process has started, we will give regular updates showing realm descriptions and new artwork.

People who pledged above a certain threshold will have access to our test server from the very early phase of development and will be able to test every new feature we add until the application goes live.

As you can see, if this product is used at your table, there is a new “game within game” aspect that will be added. Is this product for everyone? Certainly not, but if you, like me, have always wanted to have this type of element in your game, this is well worth checking out. This is not a revolutionary or groundbreaking product, as other games have done similar things but without the technology piece. The technology piece is new and forward thinking. You can learn more about Seeds of Wars over on Kickstarter. Please keep in mind that the link will take you to the preview of the campaign and will still work when the campaign goes live.