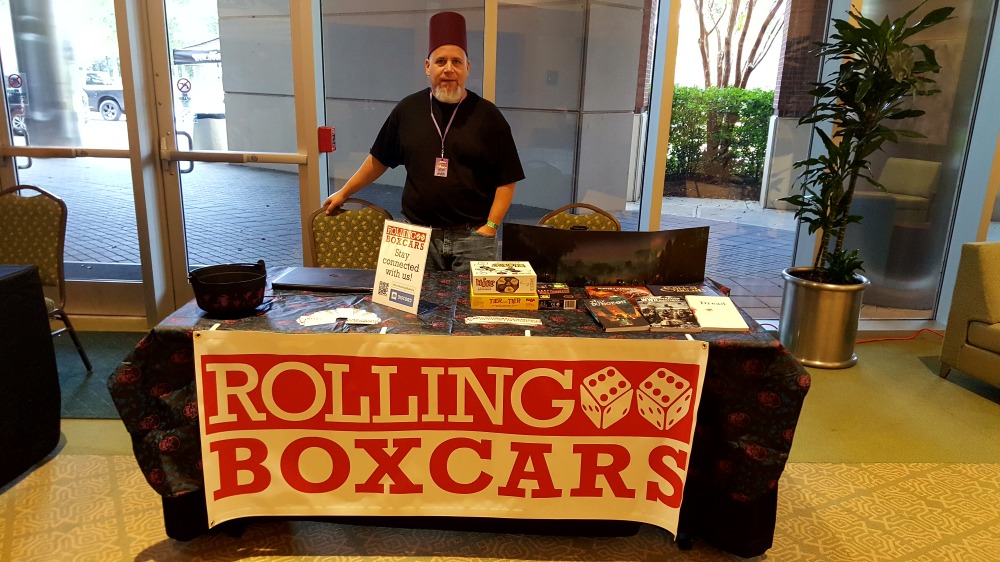 What a fun weekend! On the heels of feeling under the weather at the beginning of the week, I ended the week by spending Saturday at a small homegrown comic convention that was organized by my local comic book shop, Soundwave Comics. It was a well run and highly organized one-day event. I was super happy when I was informed I could have a table in the lobby to promote Rolling Boxcars and gaming in general. This was Rolling Boxcars inaugural event with the intention of promoting Rolling Boxcars. I have to admit, it was a great experience, but also eye-opening. Comic conventions are fun and there’s lots of crossover between the comic and gaming segments of geekdom. I know everyone that set up at the convention took away something different, but for me, the following are things I will keep in mind for future events.

Bring a better selection of boardgames

Work with local gamers to organize, demo, and run games in the game area

An amazing day spent with awesome people at a great event! I met and talked with some really great folks, both gamers, and non-gamers. Had the opportunity to chat with some old friends I hadn’t seen in several years (Hi Mia and James). I even had the chance to meet a few comic book artists, pick up some new comics and got an autograph from Larry Watts to cap off my day. One thing that really surprised me was that several attendees commented that they were hoping to find some type of gaming at the convention. I see this as an area where I can help Soundwave develop this into something that will positively enhance the convention; provided it’s a direction they’d like to go in. I guess it’s time to chat with the organizers to see what I can do to help. The vibe of the event was awesome, it was very well run, and I look forward to being there again next year; hopefully organizing some gaming!

Follow Modoc on G+ or on Twitter at @DM_Modoc
Join our Discord
We’re now on Facebook!
Learn about our Fall Patreon Supporter Drive Here  <– Time is running out!