What follows is session 4 of my ongoing Masks of Nyarlathotep game that I am running for four players. Nick Jones – Investigative Reporter. Sam Switch – Mechanic (who has a deep dislike for Henry Ford), Daisy Elizabeth Tillinghast – Cat Burglar (her cover is governess/nanny), John  Bigbeautea – Occultist. 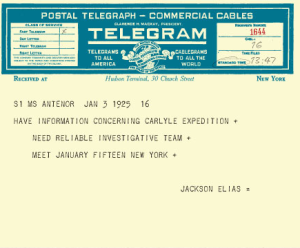 Session 4 opens with the investigators all receiving a telegram from Jackson Elias; he wants to meet with them in New York City on the 15th of January but it was oddly missing the meeting location and time. The investigators assembled at Daisy’s “country” house in New Jersey; just a stone’s throw from the river separating New Jersey from New York. The morning of the 15th, the last investigator arrived and after a few hours of catching up on what each has been doing for the last four years, Daisy receives a hurried call from Jackson Elias. He seemed a little out of sorts, but it was definitely him, and he advised her of the location and time of the meeting set for 8 pm that evening. They were now to meet Jackson Elias at the Chelsea Hotel at 8 pm in room 410.

The investigators doing what they do best, overthinking everything, decided to head into the city to scope out the Chelsea and try to get an audience with Jackson Elias at an earlier time if possible. Arriving at the Chelsea they quickly realize it’s an upscale and kind of swanky hotel. Nick and John enter and speak with the concierge and suddenly they are successfully bribing the man as they inquire about a possible speakeasy that could be located on the premises. To their chagrin, the man gives them very discrete instructions on how to locate and enter Chelsea’s speakeasy which is located in the basement.

Entering the speakeasy, they find it very laid back and low key, of course, it’s only midday. The ladies, Sam and Daisy, also enter and talk to the concierge about a water closet and while getting directions to the nearest toilet, Sam also discretely asks about being able to get a drink. Succeeding on her roll, he also informs her about the speakeasy. Can you see where this is going yet? Nonetheless, I now have all four investigators in the basement of the Chelsea in a speakeasy, what could wrong? Shall we find out?

Sam approaches a man who is seated at a high top table and who appears to be rather inebriated. She opens the conversation with the man a little something like this “Hi, do you have a room here at the hotel?” Well, the drunk man, who was not a paying guest of the hotel, took it as a proposition from a tomboy prostitute and he responded in kind. Sam, obviously did not intend for the question to come across as a proposition for sex was horrifically offended when the man responded and tried to put his arm around her. Her instinctual response was to pull a wrench (carried in her coveralls) and bash the man in the head. This set off a chain reaction of events that further took the story sideways. Shall I elaborate?

The vibe in the speakeasy changed… Sam now had everyone’s attention. A bartender rushed over and grab the man. Holding his bar towel to his bleeding head, he escorted the man out through a hidden door behind the bar. The fellow investigators were stymied as to what to do next so I helped them out a little. A large gruff-looking bouncer approached and bear-hugged Sam, dragging her to a door in the far wall. Thrash about as she might, she wasn’t breaking free. The bouncer attempted to escort her up a long flight of stairs that eventually would lead out into a back alley. About halfway up the stairs Sam, who has a rage problem, was able to brace her feet against the walls of the stairwell and violently thrash about. It was then that she was able to break free and as a result of the bouncer being off-balance, she sent him tumbling down the stairs. At the end of his trip, he crashed through the now-closed door, sending splinters of wood into the speakeasy. Sam, deciding that discretion was now in order, hastily exited the stairwell into a back alley. After calming down, she returned to the street to await her friends. There she waited in the bitter January cold.

Nick, Daisy, and John were left to pick up the pieces but decided that it was probably best to leave the speakeasy and return to the hotel in the evening at the appointed time and place. They also exited through the stairwell into the same back alley. Not wanted to return to New Jersey just to make the trek back to the city, everyone headed to Daisy’s antique shop in Greenwich Village. There they laid low in a second-story apartment that Daisy keeps for those times that she doesn’t want to travel back and forth. From here, they headed back to the Chelsea at the appointed time. They are able to enter the Chelsea unmolested by the staff; the staff is unaware of the issues from earlier in the day.

They arrive at room 410 and knock on the door. Upon receiving no answer from Jackson Elias who by all rights should be there, Daisy checks to see if the door is locked and it is. Using her skills, Daisy attempts to pick the lock but is unsuccessful in her attempt to pick it quickly and it takes her nearly eight minutes to get the lock picked. Slowly opening the door they find that the two-room (sitting room opening into a bedroom) hotel suite has been tossed and a window is open in the bedroom; allowing a frigid draft to blow through the room. It is when they enter the bedroom that they find Jackson Elias laying on his back on the floor. At a loss for what to do at the obvious death of their friend, they frantically search the room for any hint of who might have done this. While this is happening, Daisy calls down to the front desk and requests a doctor. They have about 20 minutes before a doctor arrives.

During this time they find a box of matches from a Shanghai establishment and they also find a letter that is postmarked from Cairo Egypt. Lastly, through all the blood on the head and face of their friend, Jackson Elias, they all noticed an odd symbol carved into his forehead. Unfortunately, they were not able to identify who did this. Just before the doctor arrived, John, Sam, and Nick left and returned to Daisy’s antique shop to await her return. Daisy, on the other hand, elected to stay and meet the doctor and subsequently meet Detective Poole who would arrive nearly an hour after the doctor.