We last left off in Part One: Proof of Concept — a dungeon based on an electrical schematic. The concept worked but left us with an ugly-looking map. In step two, it’s my goal to refine the map into something more appealing.

As it stands, the map above is pretty ugly. Before I start moving things about, I needed to figure out what this map for. I began this project not really caring what the map would be used for. My only focus was, is this idea possible? Yes, but now it needs a purpose. Looking at its current compact design it could go anywhere; sword and board fantasy, post-apocalyptic, even espionage. Since I had a choice of anywhere, I decided to go post-apocalyptic using Goodman Games’ Mutant Crawl Classics. This decision was in part of wanting to continue the theme of the TS-808 Tube Screamer dungeon as an artifact built long ago by the rock gods of yore. Plus I’ve had some interest with my local gaming group to play MCC.

Knowing where I’m going with the map and have a basic theme it was time to push and pull pieces around. I started arbitrarily adjusting room sizes and spreading them out without disrupting their positions relative to each other. Remember, I still want to keep the basis of the layout anchored to the schematics. As items spread out, the dungeon as a whole started to take shape. 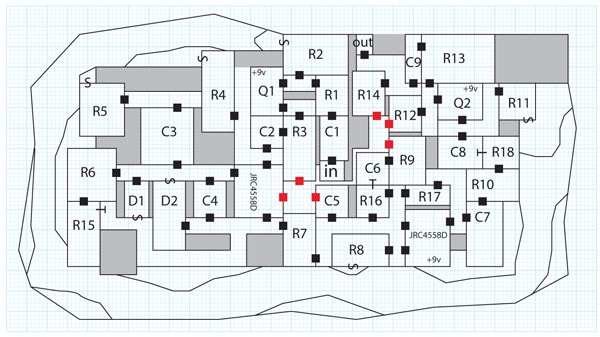 It’s better but it still wasn’t speaking to me.  The +4.5v long narrow passageway was an issue and my focus at this point. At first, the long narrow hallway seemed fine but as rooms started to grow I wanted more than a claustrophobic’s nightmare.  I spread out the walls and thought of it as a deep chasm (above). The connection to the circuits became outcroppings, unreachable by the adventurers without flight. That helped a bit but not enough.

I reshaped the map again (below) so that the entrance was not in the center of the map. That gave me the idea to connect the entrance to the +4.5v passage; moving it far right of the map as a cave opening. I kept the idea of the +4.5v connections still being out of reach of the adventurers. Those connections now became high defensive position to thwart intruders into the cave. With the ceiling raised, those areas were better-suited for combat and the defenders had the ideal view from above. The entrance and exits of those spaces retained lower ceilings so adventurers could dive for cover from ranged attacks. It was coming along quite well and as I was starting to brainstorm the occupants. Then another thought popped into my head that changed the map once again. 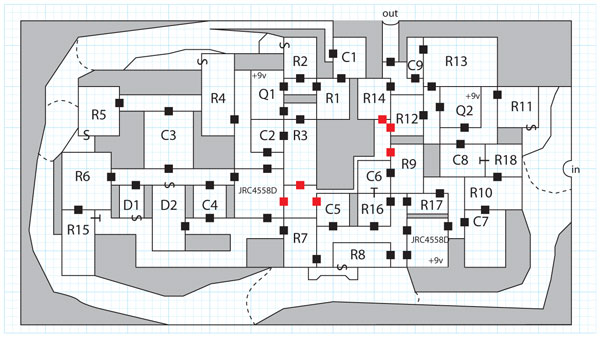 The more I looked at that passageway, the more I saw it as something else. Its location hugging the outside of the dungeon reminded me of an underground rail system; similar to the monorail system used in the James Bond Film “You Only Live Twice”. Combine that with the boxy rooms and my cavernous dungeon looked more like an underground base. I reworked the map once again (below) and thought about changing the adventure to an espionage game. The entrance moved back to the outside of the map next to C1. I moved the “out” to the center. I envisioned it as a missile silo housing the focus for the adventure. The JRC4558D’s became the control centers for launching the housed warhead, while the other rooms throughout were storage, offices, sleeping quarters and the like. The +4.5v passageway reverted to a narrow, rigid man-made structure to become a tunnel for a monorail system. I lowered the +4.5v entrances and transformed them into station platforms. The entrances were no longer secret, though still label as such on my map. The rooms to these entrances could be monorail stations requiring special clearance. Armed men would protect the two larger platforms that are closest to sensitive areas.

The map was shaping up nicely. I even color-coded the rooms to represent the four sections of the circuit: Yellow — Input Buffer, Blue — Clipping Amp, Magenta — Volume and Tone, and Gray — Output Buffer. But wouldn’t you know it, that little voice in my head kept talking, “I thought this was going an MCC adventure, not an espionage game? Besides what a boring base. It’s all a single level. In “You Only Live Twice” the secret base was inside a mountain with multi-levels.” Multi-level huh? That would look cool and I could convert it back into an MCC adventure quite nicely. Giving in to the voices I enacted the spirit of the Jeffersons. That’s right, we are moving on up.