Recently, I received an older set of Basic Dungeonmorph Cards from one of our very generous Patreon supporters. These had been on my radar for a long time but I never managed to acquire a set. Before the cards, there were Dungeonmorph Dice which are still available. Their premise was simple—roll some dice, make a dungeon. While the dice are large and travel well, they can be problematic for those with aging sight. The cards, a derivative of the dice, appear to be a solution to that problem. Readers should note that there is a newer set of Dungeonmorph Cards available; the content and quality is virtually the same, with only the packaging being different. 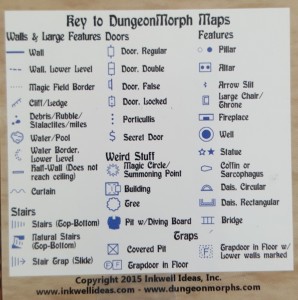 The cards measure 2.5″ square and feature the classic blue and white color scheme of those dungeon maps of yore. Although a game master is no longer rolling dice and randomly building their dungeon, they have a little more control over what that dungeon looks like. To be fair, you could do the same thing with dice but would need multiple dice sets and the cards are much nicer to work with. While they include doors, statues, traps, and other symbols, they are otherwise generic. To that end, they are finished with a dry-erase coating.

The 90 card deck features double-sided cards, back is a mirrored version of the front, with traditional dungeon and cavern designs for creative game masters to work with. Each card connects to any other via equally spaced corridors which amplifies Dungeonmorphs usability. The DungeonMorph cards match the original 15 Dungeonmorph Dice designs.

One concern I have with the product as a whole is, if used at the table like dungeon tiles it could be subject to shifting as players roll dice or move things around. An easy solution to mitigate the likelihood of someone messing up the dungeon is to put a small piece of plexiglass over the top. It would preserve your dungeon and also serve as an “erasable” surface on which to write.

Dungeonmorph Cards are fun and creative for game masters on-the-go to quickly map out an idea. A map is meant to be 5″x5″ (2 cards by 2 cards) but in reality, it can be as large or small as the game master needs; the only issue I can see arising is room numbers potentially being duplicated. Which then frees them up to spend their limited time populating the dungeon and developing a story. Dungeonmorph Cards are an inexpensive and time-saving tool to have in your game master’s toolkit.

If you liked this review and would like to see other reviews in the future, please consider becoming a Patron by clicking on the Patreon banner above. Only Patrons get the opportunity to provide us with review recommendations each and every month; they also get to read all reviews before anyone else!