Welcome to part six of my exploration into converting the electrical schematics of Ibanez’s TS-808 Tube Screamer guitar effects pedal into a dungeon map. For those who have just joined, in Part One: Proof of Concept, I proved an electrical schematic can be redrawn into a dungeon map. In parts two, three, and four, I further refined and developed the layout; finishing with an illustrated three-dimensional view. In Part Five: Capacitors as Elevators, I began the process defining each room based on the electronic components starting with the capacitors. Now, part six continues that journey with diodes and resistors. There is a lot to cover so let us get started.

Diodes
Diodes are electrical components that allow energy to flow in only one direction. One end restricts the flow of current while the other allows it to move freely through. The TS-808 uses two 1N914 diodes which are signal diodes, D1 & D2. The image of the circuitry I’m using for reference shows the diodes with cylindrical orange bodies encased in glass with a white stripe at one end to mark the cathode. Above is an example of a 1N914 diode (note: the example uses a black stripe).

To best represent their function on the map and in keeping with their intended function I’ve placed them on two levels. By spanning them across multiple levels it restricts movement in one direction. D1’s direction of flow begins with its door on level three. It continues to its open back wall which drops to the hallway below on level two. Along the open back wall, the characters will find a white stripe that acts as a warning stripe. If the stripe is stepped on it will release a hidden ladder that will allow them to descend safely to the hallway below. It is the character’s only direction to go since once inside the room the door will not open from the inside—try as they might. Though it is not impossible to enter D1 from level two, its access is restrictive since PCs will not have the means to ascend the height. Once the last character is off the ladder it will retract back into its hiding spot.

D2’s flow is similar to that of D1 but in reverse. D2’s entrance is on level 2. The flow continues through the room’s ceiling or lack thereof. D2’s ceiling runs parallel to the ceiling height of the level 3 rooms, creating a dangerous falling hazard for characters in the level 3 hallway. Though entering D2 through level 3 is not restricted, the means of descending and surviving to level 2 are. The height is greater than any length of rope that the characters will possess and the walls are to smooth to scale. Once again characters will find a white stripe at the back of the room along the floor. If stepped on it will reveal a ladder to level 3, their only option once the door closes behind them.

The look of rooms D1 and D2 are the same. The two diode rooms have smooth orange walls with a thick glassy coating. At the far end of each, painted on the floor, is a thick white stripe. The room’s metal doors are smooth, shiny,  and open with a touch. The doors automatically close after a few seconds once the threshold is clear and will not reopen from within.

Resistors
The most common component in the TS-808 is resistors. Resistors restrict the flow of electrical current. There are many different sizes or values of resistors. To identify the resistance value, each resistor is marked with color bands. There are three styles of markings, four, five, and six bands. Each color band represents a characteristic of the resistor. My reference image below demonstrates the four-band marking. In a four-band marking the first two colored bands represent the first two numbers in the amount of resistance measured in ohms (Ω). The third number is a multiplier applied to the first two numbers and the fourth is the resistor’s tolerance. 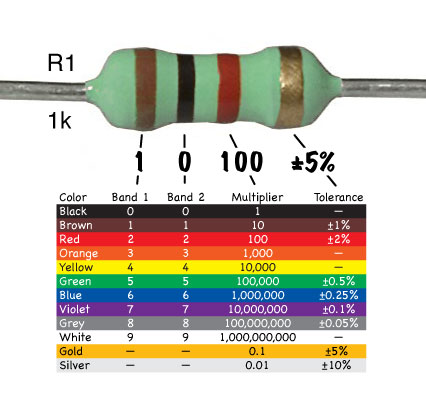 There are 15 resistors of various values used in the TS-808 circuit with another three variable resistors which we will discuss a little later. The values of the 15 resistors range from 100 ohms, the least amount of resistance to 510k (510,000 ohms) the greatest amount of resistance. To mimic resistors on the map I’ve decided to treat each resistor room as an encounter that offers the players a degree of resistance depending on its value. Rooms with higher resistance might contain a larger number of foes, difficult terrain, or a simple obstacle that will require time to move, thus triggering a possible random encounter. The resistor rooms are the meat and potatoes of the dungeon. They will hold the most encounters or tests for the characters.

The resistor rooms will remain their current shape even though thinking now I should have made them like the TS-808’s resistors which are hourglass-shaped. But that might have made things more complicated and it was hard enough to get to this point so each room stays the way it is. Each resistor room features a muted blue-green, sage-like colored walls, with fourcolored stripe bands depicting their real-life value codes. The doors for each room are similar to the doors for the diodes; metallic doors that open when pressed on. Unlike the doors for the diodes, these will open from either side.

If you count all the resistors used in the TS-808 you’ll see 18 resistors listed. Three of these resistors are different than the others. These three are called Potentiometers or Pots for short. Potentiometers are a mechanical device that can vary the resistance by turning a wiper along a strip of resistance material as it moves from one end to the other. The potentiometers in the TS-808 are used for Overdrive (gain), Tone, and Level (volume). These controls allow the end-user to manipulate their sound.

On our map, the wiper lug represents a special lift and/or entrance to an elevator that only opens once the room’s puzzle is solved. In the instance of R15, the wiper lug is a secret lift that will allow characters to travel to level 2. In R16 and R18 the wiper lugs are entrances to elevators. In each of these rooms, the characters will have to figure out how to operate a set of controls to either open the elevator doors or discover a hidden lift. The difficulty of the task is dictated by the component’s resistance value.

Each of these rooms will look similar in style. The walls are smooth metal with a beige wafer board looking ceilings. Each has a large rotating shaft in the relative center of the room that disappears into the ceiling. The shaft will turn and will be part of the puzzle to solve. Since the three knobs affect the overall sound that the pedal produces, the shaman that sent the group into the dungeon needs the shaft turned to precise locations to get the maximum effect out of the sacred artifact. By setting the potentiometer in the correct position as directed by the shaman the special entrance for each room is revealed.

Now with the majority of the rooms defined now comes the hard part, Part Seven: Transistors and Opamp. Things get a little tricky as I deal with the spacial conundrum of the Opamp. I hope you’ll return to see how I finish adapting the components for the Tube Screamer Dungeon.