No Country for Old Kobolds

Back in late 2014, No Country for Old Kobolds launched on Kickstarter, and I was apprehensive about it. At the time, it was just another of the myriad of Dungeon World hacks that were being published. In the spring of 2015, I got the chance to play a one-shot and promptly threw my support behind the “late Pledge” campaign. Fast forward five years, and here we are; I am re-visiting No Country for Old Kobolds with new vigor and finally publishing a proper review of this unique and oddly interesting game.

No Country for Old Kobolds turns the traditional fantasy trope of kobold hunting inside out and upside down by having players take on the role of none other than, you guessed it, kobolds, instead of traditional heroes. As such, the game does require players to approach it with an open mind.

The dice mechanic employed in No Country for Old Kobolds is a simple 2d6+attribute modifier to determine the level of success or failure of a Move. On a 10+, you’re successful. On a 7-9, you are partially successful, but there will be a drawback or complication. Lastly, rolling a 6 or less means you have failed to accomplish the task in the way you had intended; the GM will now be able to impose direct or indirect complications into the narrative.

Moves are actions that are triggered by the narrative; they’re typically triggered to resolve something or to move the story forward. There are several types of Moves in No Country for Old Kobolds: Kolbold Moves, Village Moves, Country Moves, and Champion Moves. Each is used at various times during gameplay when the narrative permits their use.

So, what is No Country for Old Kobolds exactly? I’m going to let the game’s author summarize it for you.

Why do we all hate kobolds so much? It’s just a matter of course that in every fantasy rpg you play your first level adventurers will go out and murder a couple dozen kobolds, collect their loot, a bit of experience and move on to bigger badder things. Ever wonder what the kobolds thought about all this? Ever think maybe all those kobolds aren’t the bad guys we make them out to be? Well No Country For Old Kobolds is built to explore the world through their eyes! Sometimes this view of the world can be comedic, sometimes heartbreaking, sometimes heroic. No Country For Old Kobolds is a tabletop pen and paper rpg based on Dungeon World by Sage LaTorra and Adam Koebel and World of Dungeons by John Harper. While it maintains some of the core mechanics of these two games it has been heavily modified to better model the world of kobolds. You’ll play champion kobolds – the best of the best – protecting your village from the kingdoms that you created during game setup. As your kobolds die they pass traits down to their children, each generation getting stronger and more capable! You’ll fight for your village in a game of survival, heroism and black comedy. (http://nocountryforoldkobolds.com/)

Playing kobolds does take a little getting used to; we’re used to killing them after all. At the start of a new game, players are going to create three things (or some part thereof if using a module) that will set the game in motion.

A typical game involves kobolds venturing out from their village into one of the adjacent countries seeking out something their village wants. Wants are those things that they need to survive or desire for some other reason. Wants are also a game mechanic in the form of a Clock. As players “miss” rolls by rolling a 6 or less, the GM checks off boxes on the Want Clocks. As each Want gains more checks, there are detrimental effects players will need to manage. The first three checkmarks serve only to apply pressure to the kobolds; the fourth and fifth checkmarks each reduce the village’s population by one; the sixth reduces the population by 1D6. A Want Clock is reset when the at least once surviving kobold returns to the village with whatever “thing” satisfies that Want.

Satisfying a Want resets the Clock, but it does not remove it or return any of the eliminated population. Village Population is another game mechanism that the players have to manage. If their population ever drops to zero, game over! Their purpose for living—their family, their clan, is gone. With the Want Clock reset, also comes a checkmark on one of the External Pressure Clocks. These Clocks represents the external pressures being applied to the village by the surrounding countries. For example, in the module provided in the book, The Luchadwarves produce an excessive amount of toxic garbage, and it’s creeping into the kobold’s lands. This External Pressure comes to bear when its Clock has three checkmarks. Checkmarks may also be added by the GM as a way to push the story forward when the kobolds are unsure of what to do or seem to be living the good life; these marks are not directly connected to any other game mechanic.

What else happens when returning to the village? The first order of business when kobolds return is to decide if they give the wanted resource (Breed) to the village or horde (Stockpiles!) it for themselves. That decision drives what village Move is triggered. Typically, they will turn over the resource as it’s in their collective best interest. The Breeding Move will increase their population, which is critical to long term success. The Stockpiles! Move can mean that additional resources were collected or some type of detrimental backlash that adds Want Clock checkmarks and forgoes the Clock reset.

When a kobold dies, the player is given two death tokens, which can be spent to immediately bringing a new kobold into the story. Thus, the player is not out of the game when their character perishes. In the event they choose to not do that, they will have to wait until the party returns to the village to bring a new kobold into the game. The Death tokens are then saved and can be used to increase the result of another kobold’s roll on a one for one basis (e.g., a 7-9 result becomes a 10+ result).

As you can imagine, combat plays a significant role in this game, both mechanically and narratively. On the mechanical side of things, there are some “muddied waters” when it comes to combat. First, everything, whether it is a single kobold, a village, a country champion, or an adventuring party is considered a unit. This concept is supposed to lead to shorter and faster combats, but the rules don’t really explain how units or parts thereof engage—leaving me confused. For example, I had a patrol of four elves attack the Kobolds; should they fight as a single unit? Should they be separate units? I played them as different units, and that led to a much longer combat and resulted in what was likely a higher number of missed rolls. Combats left me somewhat confused and frustrated as a GM during my first session.

Second, the rules do not explicitly state how and when damage is dealt. In Dungeon World, the combat-related moves will typically tell a player that their character is going to be hit or exposed to injury on a miss. The combat-related move here does not give the same type of indications, though from the Attack Move example in the book, it is implied that damage is dealt on a roll of 6 or less (a miss). This just seems to be a nuanced piece of a core element of the game that could have been better explained and detailed for a broader audience. 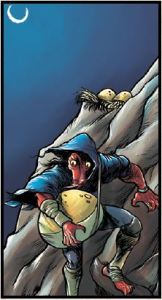 To tie up the core concepts with a pretty little kobold bow – you play kobold characters who venture into hostile areas where everyone hates you, to seek out things (Wants) your village needs for survival or vanity reasons. All the while, you are being challenged to overcome obstacles and situations that will take all of your limited skills to overcome, fail those dice rolls, and the Want Clocks become a resource management issue you have to contend with. Even satisfying a Want, however temporary it may be, increases the External Pressure Clocks that will eventually come to bear on your village. While nothing can be done to prevent that inevitability, what can you do within the constraints of the narrative to be prepared? Maybe something and then again, maybe nothing.

I have had gameplay experience from both sides of the table. As a player, I enjoyed the game and experience of playing a kobold and striving to survive. I really enjoy the whimsical nature of the theme and the generational aspect of playing your kids, grandkids, or others from within your family group. From a player perspective, I like the clocks, they give your purpose visualization that is easy to understand.

As a GM, I am still cutting my teeth on this game. There are still aspects of the rules, like combat, that has not fully sunk in, and I feel I am misapplying the mechanics. More of a user issue, but there are some ambiguities with the combat rules, as I mentioned above. Pacing is the other issue I am struggling with. Pacing both in mission timelines and combats is important because every time players roll dice, there is a good chance they can “miss” and thereby earn another checkmark on a Want Clock. Too many checks, too quickly, means the certain death and destruction of their village and the premature end of the game. I probably should have paid a little more attention to the tips the author provides regarding mission structure.

Finally, I want to call your attention to how beautiful this book’s interior is. Its full-color layout is well balanced and beautifully illustrated. Though it is not without issues. This review takes into account the PDF version only, but there is one page where a graphic image runs into the gutter and stands out in stark contrast to the rest of the book. I noted a few editing issues, but there are very minor and do not detract from the quality of the book.

No Country for Old Kobolds is a whimsical and fun change of pace from your run of the mill fantasy game. The mechanical system, by and large, is easy to understand, though there are some nuances that you’ll have to internalize (better than I did) to really make this game shine for you and your players. It can be easily run as a one-shot or as a longer campaign; my recommendation is to run it in short story arcs of two to three sessions each. If you pick up the game or have played it before, comment below and tell me your thoughts on No Country for Old Kobolds.

Did you like this review? Would you like to see us write more in the future? Your support means we can keep writing more reviews and articles. Please consider becoming a Patron by clicking the Patreon banner above.