Welcome to part ten, the final part in the Tube Screamer Series, which began with converting the electrical schematics of Ibanez’s TS-808 Tube Screamer guitar effects pedal into a fully-realized dungeon map. I deviated quite a bit with my last two installments and took a little hiatus. I’m back fully refreshed and ready to wrap up this series. In part ten, I take a look at block diagrams and how they translate to the dungeon map. For those needing to catch up, I’ve placed links to all previous installments at the bottom of this page.

In electrical schematics, block diagrams are groupings of electrical components that perform a particular function within the circuit. For the Tube Screamer Dungeon, I’ve utilized four of the five blocks in the schematics, Input Buffer, Clipping Amp, Tone and Volume, and Output Buffer. Wondering what the fifth block is and why I left it out? Well, it’s the Power block. Looking at the entire schematic below, we see that the power block connects to ground, +9V, and +4.5V creating a closed circuit, a continuous loop.

When I initially began translating the schematic into a dungeon map, I had a concern that there would be no beginning or end if I used all five blocks. I didn’t think it would work. The easiest solution was to not use the power block and treat the input as the beginning and output as the ending. Looking at the finished map, I can see that my initial thoughts were incorrect. I most certainly could have added in the power block without it disrupting the flow of the dungeon. But I didn’t know that then. I’m at the end of my journey with this experiment and past manipulating the dungeon map, so it remains unused.

For those who are curious about how it would have fit in. The power section would easily fit in what I’d like to refer to as the basement of the dungeon, the lowest point in the map where I’ve placed the ground (green shaft). I’d need to extend the +4.5v (purple shaft) and might put in a third shaft for the V+ (9v) or come up with another solution since they aren’t aligned like the others. I probably would leave out the power adaptor input since it’s not needed when a 9v battery is in place. If I venture again into translating an electrical schematic into a dungeon map, I’ll remember the lessons I’ve learned here and not hold back.

Of the four-block diagrams, I cleverly color-coded them, so when I got to this point in the creation, I’d be able to identify them easily. A quick review of the block and their colors are as follows: Input Buffer (yellow), Clipping Amp (blue), Tone and Volume (magenta), and Output Buffer (gray). So the question is, how do the block diagrams translate into the dungeon map? We’ll take a look at each one as they all represent something different.

Let’s start at the beginning with the Input Buffer. The function of the input buffer is to persevere the input signal by creating a high input impedance while avoiding losing the high-frequency of the signal and filters out low-frequency humming. In a nutshell, it cleans up the input signal while giving it a boost to maintain its integrity. A simple translation to our dungeon map could look like this. Our group of adventures, the signal, have strong individuals and weak individuals. The input buffer section of the Tube Screamer Dungeon could act as a character funnel since I’ve originally intended to use this map for Mutant Crawl Classics. This section becomes a trial by fire to weed out the weak characters while boosting the strong, advancing them to level 1. If I was using a different system, the input buffer could be looked at differently. The entrance to the dungeon is feared by the local population. Its an extremely dangerous place. Those who are not strong will not get far. Lesser creatures that enter never come out; their remains were strewn about. Those who are strong encounter difficult obstacles and overcome them, boosting their confidence while those that are weak are deterred from ever entering. Its interpretation may vary, but the main focus is to clip the weak and unwanted and boost the victors. 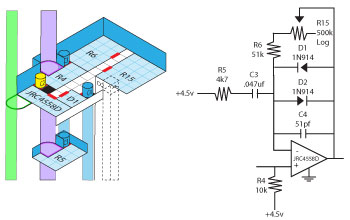 The next block diagram in the dungeon is the Clipping Amp. The clipping amp section is the third level and the core of the Tube Screamer circuit. In this block, the signal is placed in a feedback loop, which shapes the amount of clipping and the frequency used to overdrive the signal. It’s what gives the signal that extra boost to overdrive tube-driven amplifiers to produce that gritty distortion sound. This section of the dungeon map has the potential to increase the difficulty level of the entire adventure. Room R15 represents the overdrive control for the TS-808 pedal. By manipulating the controls in room R15 to discover the secret lift pushes the dungeon into overdrive, increasing the same way as the effects pedal. To aid gamemaster, I’ve compiled an overdrive chart (available to Rolling Boxcars Patrons) to roll on to see how much overdrive to apply to the adventure. The outcome will determine how difficult the dungeon becomes. To be fair, I’d allow players to revisit R15 to continually manipulate the control for a more favorable result, assuming they catch on to the mechanics at work. Keep in mind players will only notice the change when encountering obstacles and not at the point of manipulation of the controls.

Our third block diagram, Tone and Volume, incorporate two functions. The tone function helps shape the signal by cutting off harsh high-frequency harmonics through a low pass filter while an active tone circuit boosts the treble through the manipulation of a potentiometer. We can translate this function to the relationship between the adventures and the dungeon’s natural inhabitants and its systems, a reaction table if you will. The tone dial on the TS-808 has two sides, bass and treble; the 12 o’clock position being its neutral location between the two. The tone dial is set at the neutral location by default. It will stay that way until manipulated. The bass side signals a lesser reaction while the treble is the opposite. I’ve created a chart (available to Rolling Boxcars Patrons) to roll on to determine the outcome when manipulated. The volume function (level) is fairly straightforward and does exactly what you’d expect. It increases the level of the signal. In the Tube Screamer Dungeon, it increases the number of foes or the frequency of encounters. I’ve created a chart (available to Rolling Boxcars Patrons) to aid gamemasters with the outcome. The controls for the tone and level are represented with a “T”; Tone in R16 and Volume in R18. Both are manipulated when accessing the elevator within those rooms. R16 tonal control leads to a dead-end, while R18 level control brings the adventures to the final block diagram, the Output buffer. 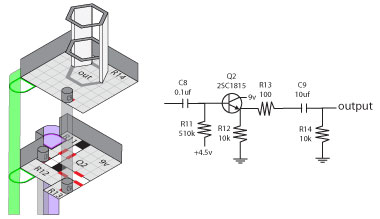 Similar to the Input Buffer, the Output Buffer is in place to level out the signal as it feeds to the next link in the signal chain. It cleans up the signal and maintains its integrity. For our last stage in the Tube Screamer Dungeon, it represents the end game for the adventure. Depending on how much the players have manipulated the controls throughout will determine the difficulty they will face at the end. You could end up with a very difficult “boss fight” if the Clipping Amp and Tone and Volume were turned to max or lesser if they were turned down. In the end, like the Input Buffer, only the strongest will survive to make it to their next adventure.

That completes the block diagrams and my foray into converting the electrical schematics of Ibanez’s TS-808 Tube Screamer guitar effects pedal into a fully-realized dungeon map. I’d like to thank all of the readers who have followed my journey through this process, providing me with feedback and encouragement. It’s now time for me to put into practice the concepts I’ve laid out here over this ten-part series and create a fully functional adventure with the Tube Screamer Dungeon map. There is still a lot of work and tweaking to do, but through the process of test playing, I should hopefully see my crazy idea come to fruition.