Skip to content
Our good friends at Chaosium have been teasing all week about something new for the Pendragon roleplaying. Friday, they announced that they would be releasing a 6th edition Quick-Start with a scenario. Well, here we are, and here it is! As a long time fan of Pendragon, this is exciting news, and I look forward to what the future holds for this classic roleplaying game. You will find the link to the Quick-Start below within the press release – happy reading!
~ Modoc
Follow Modoc on Twitter at @DM_Modoc
Follow Modoc on YouMe Social
Join our Discord
We’re on Facebook!

This week Chaosium marks the second anniversary of the passing of Greg Stafford, the company founder and its original creative visionary. With the hashtag #WeAreAllUs, we commemorate Greg as one of the greatest game designers of all time; winner of too many awards to count; and a friend, mentor, guide, and inspiration to generations of gamers.

While Greg Stafford’s influence on the universe of tabletop gaming is beyond measure, he considered the King Arthur Pendragon RPG his masterpiece. And this year for #WeAreAllUs, we salute Greg’s magnum opus with a free sneak peek of the 6th Edition core rules and an accompanying scenario, The Adventure of the Great Hunt, originally outlined by Greg way back in 1991 and presented here in print for the first time. 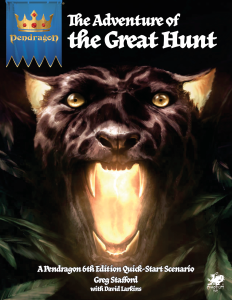 Greg started work on the new edition ten years ago. Since that time, it has gone through multiple development phases and is at last nearly ready for its public debut. He called this, and always intended it to be, his “ultimate edition” and we are proud to see it finally coming to fruition.

“Pendragon veterans will find that the fundamentals of the game remain the same, with subtle modifications reflecting the culmination of nearly three decades’ refinement of Greg’s vision of Arthurian fantasy”, said Pendragon line editor David Larkins.

For newcomers to Pendragon, everything you need to experience the Pendragon system is here in The Adventure of the Great Hunt: the core rules, a scenario playable in a single session, and six pre-generated characters.

Download your free copy of The Adventure of the Great Hunt here.

Pendragon, first published in 1985 (right) is Chaosium’s innovative roleplaying game of adventure, romance, and intrigue set in the marvelous world of King Arthur and the champions of the Round Table. Players take on the roles of heroic knights: men and women who harness their passions and beliefs in their quest for honor and glory.

Along with their companions—brave squires, seekers of knowledge, and courtly folk of good heart—they are all that stand between Arthur’s vision of a just and humane future and the dire forces that would see it fall.

Let us win glory for our king, who will reward us with honors and lands; and the devil take the hindermost!