There’s an old rundown house on the outskirts of town—Old Barnaker House. Every kid in the neighborhood knows about this place, yet everybody has a different story to tell; some personal, some heard second and third hand. But one thing remains constant in all of them, this is one very bad place. It’s Halloween night and you find yourself standing outside the Old Barnaker House all because of that jerk Roger. He dared you and your friends to spend the night there. Standing up for yourself and your friends, you couldn’t let him bully you any longer. The lot of you are determined to show him you’re no chickens! Everybody knows that there are no such things as ghosts… right?

The Dare is a Call of Cthulhu® 7th Edition scenario about surviving one night with your friends in a reportedly haunted house. The 2020 printing updates Kevin Ross’ original 1990 scenario to the latest edition of the rules, greatly expands the story, and amps up the creep factor in a kid-appropriate way. It was funded through a successful Kickstarter campaign in October 2017. It ran into one hurdle after another, but I’m happy to see it finally available to the public. For transparency, readers should note that I am one of the proofreaders.

The Dare can be summed up as a Hell House for a group of kids (aged 10-13 if using the pre-gens). They find themselves at the Old Barnaker House on a dare by Roger, a local schoolyard bully. Not wanting to give him any satisfaction, the group accepts his dare to spend a night in the old house. The kids will have to overcome their fears all while being trapped inside with Roger continually taunting and teasing them. By working together, keeping their wits about them, and some old fashion dumb luck, the kids might actually survive until the sun comes up. The Dare will challenge players mentally and their kid investigators physically.

The Dare was originally conceived as a GENCON Masters Tournament scenario (if Kevin Ross’ memory is correct) and originally published by Triad Entertainment in Dwellers in Shadow. The original scenario was only 10 pages, plus handouts and maps, whereas this version is 28 pages, plus handouts and maps. But wait… there’s more. The PDF has a total of 70 pages (including front and back cover), in addition to the updated and expanded scenario. There are ten pre-generated kid investigators, a handful of maps and handouts, a special set of condensed rules (explained below), a short article, the usual introductions, credits, table of contents, and the like.

I spent some time comparing this new expanded version of The Dare to the original 1990 version and there are considerable differences between the two. The most obvious being there are 18 new pages of content. Originally published as a ten-page scenario plus pre-gens and handouts. Whereas the updated version is now 28 pages plus additional maps, pre-gens, and handouts. In my comparison of the two editions, the earlier one was a very bare-bones affair but had enough there for Keepers to work with. The expanded version takes those original bare-bones and actually puts a considerable amount of detail into the scenario. Every location in and around the Old Barnaker House has been thoroughly rewritten and fleshed out. For example, the attic was, at best, superficially covered in the 1990 release. It is now a more interesting location for the kids to search. The actual footprint of the attic was expanded as well and now includes a cupola.

As with the attic, nearly the entire Barnaker House has gotten a makeover as well. Not only have the rooms’ descriptions been greatly expanded and fleshed out, but the floorplan itself has also been revised and expanded. Rooms have been added, locations changed, and some have been resized to accommodate the new expanded edition. The amount of Keepers’ advice present throughout has also been updated, revised and expanded. Unlike the original version, there are two modes in which to frame encounters—”PG” and “R”. The default tone of the scenario falls somewhere in between these two. At points of importance, namely set dressing and encounters, variable “PG” and/or “R” options are provided. “PG” minimizes harmful violence, gore, and death and focusing more on menace and anxiety rather than carnage. “R” pushes descriptions and the tone toward the visceral, with greater emphasis on gore, injuries, and fatalities.

The original scenario included a handy weapons reference chart for those types of things kids might likely have on them or possibly find within the scenario. This chart was omitted from this version and the basic information is included in the text itself. I would have preferred to see the original chart retained and expanded.

While The Dare is published as Call of Cthulhu® 7th Edition scenario, it uses a condensed set of skills and rules better suited for kid investigators. Bret Kramer provides a six-page simplified version of the Call of Cthulhu Rules’ main points entitled “The Call of Kid-thulhu: Simplified RPG Rules for The Dare”. These simplified rules are designed to present basic rule concepts as they are applied to The Dare. Fundamentally, it is still Call of Cthulhu at heart and the changes are meant to fit with the theme and make the game more accessible to new players—especially non-gamers. The most noticeable change has been to the skill system; they have been combined and reduced down to just 15. Traditional investigator skills have been grouped together under new kid-themed names. (e.g., Climb, Jump, and Throw are now replaced by Gym Class) The other major change is the short and sweet investigator’s creation summary. The most noticeable changes here are there are no occupations (you’re a kid!) and your equipment is limited to what a kid would have with them on Halloween night. All other changes are merely meant to reinforce the theme of the scenario and are mostly name changes. With some pre-game effort, the Keeper could convert the scenario to be usable with the full version of the rules.

As mentioned above, there is an interesting two-page article by Brian M. Sammons about 80s (ish) horror movies. In this article, “Grab the Machette,” Brian discusses the lessons to be learned from a variety of horror movies released from 1978-1989, and how those lessons can be applied to Call of Cthulhu—and other games for that matter. Brian’s article is enjoyable, refreshing, and with his expertise in the horror genre, his opinions and lessons learned are worth reading. There is also a two-page spread of “yearbook” photos presented as black and white drawings. I assume these are backer portraits. Although weirdly thematic, this just seems out of place. As a resource, the yearbook images “could” be used, but in the context of the scenario, they serve no purpose.

As far as scenarios go, The Dare is a pretty solid scenario and worth playing if you have the right group, but it is not without its quirks, but so were the 80s. First, not all players will enjoy playing kid investigators. Second, because of the premise, it does not lend itself to being played with adult investigators. Roger, the scenario’s antagonist, is challenging to successfully play without feeling contrived. This updated version does provide plenty of advice as to how best to play Roger at various points throughout; this is a big improvement over the previous version.

The expanded nature of the scenario does make it more complete than the previous bare-bones version. The overwhelming majority of the expanded content, including artwork, and advice does add immensely to the overall feel of the game, but it all adds to the increased page count. 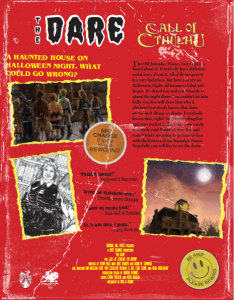 The visual presentation is an interesting mix of retro 80s aesthetics with a 6th edition Call of Cthulhu layout. The 80s aesthetic is obvious on the front and back covers which are made to look like a VCR tape slipcover, and on the character sheets as well. The covers remind me of something I would have seen in a video rental store in the 1980s. They’re replete with artistic depictions of iconic stickers, warnings, other stylistic elements. The character sheets used for the pre-gens also have an 80s vibe to them. One that can be summed up as having “Atari” racing stripes (see inset below). The layout and visual presentation of the book’s interior has a classic 6th edition look about it. It has a clean layout that is easy to read. The artwork is black and white and evocative. The maps on the other hand are far less visually appealing, but are functional and will do the job. I understand that the Barnaker house is meant to be an old abandoned house, but the maps are amateurish and are a little disappointing. To my eyes, most maps of the house appear to have a slight lean to the left, as if they have non-Euclidean geometry. Maybe it was done on purpose, maybe it wasn’t. The one handout in the scenario is reproduced in color at the back of the book and that was an unexpected nice touch.

All in all, The Dare is a fun scenario if you have the right group of players who won’t take it too seriously and just want to have a good time. As mentioned, it’s not a perfect scenario, but it is fun nonetheless and every bit the Call of Cthulhu experience. Readers familiar with the previous version will likely appreciate the expanded content, the increased number of locations and encounters, a few new weapons hidden throughout, and the ability to scale up or down the tone of the game. Keepers and players new to The Dare are in for a treat. Given its expanded nature, and player agency, playtimes can vary and I would plan on 4-6 hours or 1-2 sessions depending on your group. The Dare comes across as a genuinely creepy scenario that is worth the price of admission. Bottom line, if you liked the original scenario, or want a fun Halloween themed scenario, this is one that is sure to please in a creepy kind of way!