Eye of the Beholder: The Art of Dungeons and Dragons

One of the first questions roleplayers inevitably ask of each other is where did you start in the hobby and why? What drew you to the hobby? What caught your eye? These questions are purely subjective, but I’m willing to bet art played a large part even if it is not acknowledged. Art is pivotal to visually expressing oneself, beginning with simple cave paintings depicting daily life to a commercially driven marketing tool. It is most effective when it connects with the viewer and elicits an emotional response—for commercial art, a sale. Eye of the Beholder: The Art of Dungeons and Dragons documentary examines the evolution of TSR’s art through interviews with the artists who create it and those it touched. It’s a celebration of the art of Dungeons and Dragons.

Art is a necessary tool for a collaborative game that is played essentially in your head. A Dungeon Master can describe a scene or a creature for hours, but unless there is a constant unifying element, each listener will likely have a completely different visual image in their head. A visual representation of a place or thing aids a group, giving them a unifying perception on which to build on. It’s a core element of Dungeons and Dragons and a logical beginning for this documentary.

A stunning visual image is only as good as its ability to elicit a response or inspire the viewer. For Dungeons and Dragons art to be more than its sum, it needed to do more. As the documentary points out, the secret behind TSR’s art was its narrative suggestions–capturing a moment in time that stimulates the viewer to wonder about the events before, during, and after. Erol Otis relays in his interview how he would frame his scene with heroes triumphing while others in the party were struggling to survive combat with a strong show of emotion. Whereas Larry Elmore talked about bringing out emotion from his subjects before or after combat—using foreshadowing or other suggested imagery. Although each artists’ approach was different, each was successful in creatively and effectively connecting with the viewer.

Narrative art is not a new concept. We can see its origins as far back as primitive cave and renaissance paintings. But for fantasy art, its appeal dwindled shortly after The Great War. The documentary explains it as the public losing its appetite for fantasy art, but I suspect it’s due to the rise of photography or the change in fine art—abstraction. It doesn’t return until Frank Frazetta revives the fantasy art genre. He plays a huge role in bringing back narrative illustrations after it wanes. His illustrations bring back the energy and movement that was lost.

In the years that followed, fantasy art was only portrayed on book covers and in magazines—much of it poorly done. Marget Weis, the co-author of the Dragonlance series, tells of her first encounter with fantasy art in the documentary. It was with the first American paperback edition of The Hobbit. It depicted a weird tree with bulbous leaves in the foreground, a sprawling hilly landscape with a village in the distance, and strange flamingo-type creatures all encased in an oval shape. She describes her impression of it as underwhelming.

The same can be said for much of the early art of Dungeons and Dragons. In the beginning, illustrations for the game were raw pen and ink and stylistically all over the place. There were no set expectations of what fantasy art should look like. The artists were young. Some not even out of high school. It didn’t matter to TSR. As Tim Kask, editor of Dragon Magazine and author, states, if TSR liked the art, they would use it no matter the artist’s background or technical skill. This attitude inspired others to try. 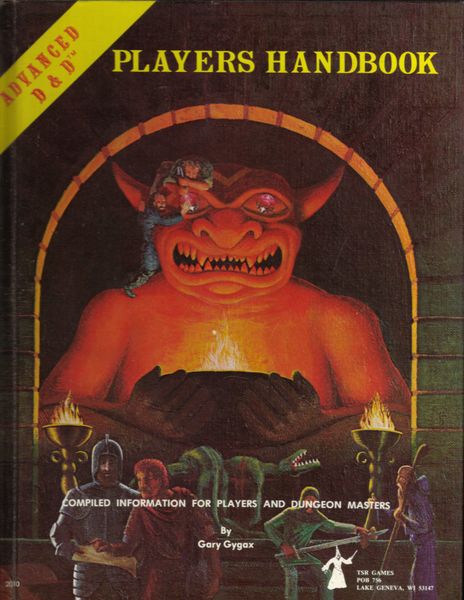 Over time the art improved. Artists like Jeff Dee, Dave Trampier, Darlene, Diesel Laforce, David Southerland, Erol Otis, and many others would elevate the game with their unique styles. Other than the cover, all art was black and white illustrations, but it had movement and, at times, humor. One of the big turning points in Dungeons and Dragons’ art is with Dave Trampier’s cover for Advanced Dungeons and Dragons Players Handbook. For me personally, it’s what initially drew me into the game and has become my favorite piece of Dungeons and Dragon art. Its success lies in its ability to capture a moment in time, providing that narrative curiosity for the events that led up to it and afterward. It, for all intended, purposes captured the feel of a Dungeons and Dragons game. The fans interviewed for this documentary commented that Trampier’s scene was exciting. What happens when the thieves remove the gem from the idol’s eye? What are the creatures killed? Why is it on the alter? What happened in this room? It gave viewers a sense of o.k. here we are, what do we do now?

The documentary takes a turn away from the art and focuses on the artists and their work environments. TSR had purchased a hotel and used its upper floors as its offices and the Dungeon Hobby store on the ground level. Artists were given the freedom to work as they pleased, setting their own hours and working in their home studios if desired. As long as the work was completed on time, TSR took a hands-off approach to manage their artist staff. The stories told by past employees in the documentary echos similar creative work environments that I’ve worked in. It can be summed up as a lot of personal freedom, practical jokes, and a collaborative environment where they could artistically play off each other.

An interesting fact I was not aware of was that TSR handed out assignments like the Monster Manual in groupings. Artists were assigned groupings of monsters, like A-C or the like, to illustrate. This created entire sections of illustrations from a single artist that would then change to a different artist with a different style when the next section occurred. If you ever wonder who illustrated a monster, all one has to do is look before or after for an artist’s mark if one was not clearly visible.

In the 80s, TSR made a shift in art style, and four artists define that shift the most, Larry Elmore, Clyde Caldwell, Jeff Easley, & Keith Parkinson. Larry Elmore is known for his landscapes, the environments in which he put his subjects, their expressive emotions, and hyper detail to their attire. Clyde Caldwell brought a sense of perfectionism to his works with his precision. He recalls in the documentary how he purposely orientated his workspace so no one could view his works in process, though it didn’t stop people encroaching for a look. He used very saturated colors, and his female character always oozed sensuality—a good marketing ploy for TSR’s target audience at the time, teenage boys. Jeff Easley is known for his dragons and the human personalities he brings to them. Amusingly in the documentary, Jeff claims to maybe illustrate one dragon before coming to TSR. The first dragon he illustrates is for the revised Monster Manual cover. Finally, Keith Parkinson, the youngest of the four, is credited with being the most influential on the other three artists. Keith sadly passed at the young age of  47, so his son provides insight into his work for the documentary. Keith’s style mimics classical painters. He was known to use a full palette of colors. Nothing was just one color. It was a combination of many to create one. His work was all narrative action scenes. Out of the four, he grew the most as an artist, Learning and building upon with his fellow artist’s aid. These four artists elevated TSR’s art to a new level and help establish the fantasy art style.

An amusing anecdote from the documentary sheds light on an unknown artist named Jack Fred. Jack Fred is a pseudonym Larry Elmore used on painting not up to his usual standards. Jack Fred was then adopted by other artists who felt the same way about works.

With the big four in place, Dungeons and Dragons product lines began to have a cohesive look to them which TSR continued to employ. A single artist would develop all the art for a setting and beginning products in the line. As an example, the documentary uses Planescape to illustrate this point. Artist Tony DiTerlizzi was the lead artist for the Planescape setting and several modules after.

Planescape falls under the Lorraine Williams era of TSR. The documentary points out the disconnect Williams’ hired managers had with dealing with their creative teams. A manager might suggest an artist use all the colors or use your most expensive paints as if the quality or quantity of color had anything to do with good art. For the most part, artists throughout the TSR era had little direction. Work would be divided amongst themselves by personal preference.

When I returned to the hobby after many years of absence, I had one lingering question in the back of my mind. What happened to all the works of art created during the TSR years? I asked Larry Elmore this very question years ago when I encountered him at my first gaming convention. Desiel LaForce recalls in the documentary that in the early year’s artists retained their works. In later years it became the property of TSR. When Wizards of the Coast acquired TSR, batches of original art were tossed away into the trash. Its significance was not understood at the time. When Diesel LaForce was made aware of this, he was able to step in and stop it, but not before at least three batches of art were disposed of. It’s was a terrible loss to fantasy art.

With each new version of Dungeons and Dragons, the art evolves. Monsters change with each new artist’s interpretation. The documentary focuses on dragons and the Beholder. For example, A Larry Elmore dragon features front arms unattached to its wings. Whereas Jeff Easley gives his dragons a humanist look, and Todd Lockwood gives his a more feline shape. With the Beholder, we see the transformation from Tom Wham’s first illustration that graced the original Grayhawk supplement to the 5th edition Monster Manual. The stylings of the monster over the years are much like the rules. It has evolved over the years. When the artists for the fifth edition of Dungeons and Dragons began their renditions of past monsters, they took all the monsters that were going to be present in the new edition; viewing each rendition through the years, analyzing what works what didn’t to come up with their versions. With the demographic target audience changing from young teenage boys to a more diverse audience, the art also needed to change.

Eye of the Beholder: The Art of Dungeons and Dragons documentary is available for free on Tubi, but it can be found on other services for a fee. The documentary is entertaining and informative. I enjoyed the humorous anecdotes and a look inside TSR during its height. It’s a shame that the documentary solely focused on Dungeons and Dragons. It would have been nice to get a broader view of all the art created and its influence beyond—all the important players were already assembled. Even so, the makers of the documentary did a good job of mixing interview segments with pieces of art that coincided with the narrative. I found it a nostalgic hour and a half romp through TSR’s past, and I think anyone who grew up with TSR’s Dungeons and Dragons will too.