The waters of the Astral Sea run deep with the thoughts, hopes and dreams, and nightmares of all sentient beings of the multiverse. It is boundlessly vast, connected to all planes of existence, including limitless worlds from your favorite roleplaying game setting. Its black waters are teeming with pirates and creatures looking to feast. Its skies produce Psychic storms that leave sailors emotionally wrecked. Welcome to the Astral Sea, or those who sail its waters, The Big Black.

The Planar Compass Zine provides readers with brand new content for the Old-School Essentials roleplaying game. Planar Compass Issue One (read our review) introduced a port in the storms known as Dreamhaven, hinting that interplanar trade passes through this small port island. Planar Compass Issue Two picks up where Issue One left off, expanding the Astral Sea Plane and the scope of what is possible. Players may venture out onto the Astral Sea, traveling, exploring, and testing their mettle against pirates, storms, creatures—and perhaps locating gates to other worlds.

Note: Planar Compass provided a review copy to Rolling Boxcars for this article. If you have an item you’d like Rolling Boxcars to review, please visit our Product Review Request page.

This massive 70-page zine is chock full of new content for the Astral Sea. Although not presented as such, this issue is in two parts. The first focuses on rules and tools to bring the Astral Seal to life. The second consists of rules for “sea crawling” and an adventure designed for characters of level 4+. Ownership of Old-School Essentials and Planar Compass Issue 1 are required to make full use of this Issue; several optional Old-School Essentials books are suggested but not required.

Planar Compass contains a variety of fully stated nautical nasties to pit characters against. These range from the semi-sentient Bubonic Barnacle with its three-stage life cycle to the feared Kear that barrels through the black waters scooping up ships and feasting on their crews. The Kear features prominently in the later “sea crawl.”

Eight new magic items spice up the Astral Sea. The most exciting and promising sand from the shores of dreams for communal dreaming. A skillful Referee might use it to foreshadow future events.

You can’t sail the Astral Sea without a ship. Ten ships with all pertinent statistical data, including a short description of the ships’ general characteristics, offer players and Referees a multitude of options. Ships sailing the Astral Sea vary in size and function. Those detailed here cover all the bases:

There are even rules for psionic characters to bring into being a psionic ship.

Rules for Astral ships follow those found in Old-School Essentials; however, two new additions make them unique to the setting—saving throws and artillery. Astral ships have saving throws the same as characters.

There are five categories:

Artillery includes details and rules for ballista and the Onauki fire thrower. Yes, a ship-mounted flame thrower with a range of up to 200 yards!

Following the Kear Dungeon are four adventure hooks for Referees that showcase the diversity of the types of adventures that can take place on the Astral Sea. 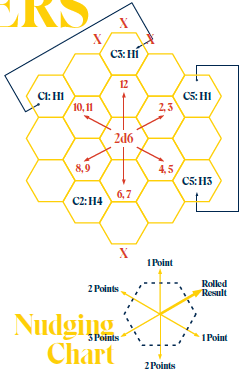 The vastness of the Astral Sea makes travel a unique experience. An effort has been made to make the travel process as smooth as possible through setting-specific navigation rules. Sailing on the Astral Sea involves a sequence of play, outlining the procedures for determining travel direction, weather, nearby planes, encounters, etc. A hexagonal rosette represents fixed travel directions in the Navigation Hex-Flower (see inset). Ships move in the direction corresponding to the sum of a 2d6 roll. A ship’s movement can also be nudged and follows a prescribed process.

The sequence of play uses other hex-flowers to determine the weather, encounters, and nearby planes. Hex-Flowers are very common in war games for naval and artillery drifting, so if you’re at all familiar with that, you’ll feel right at home.

The Astral Hex-Flower represents the vastness of the Astral Sea and is for determining travel and encounters. This hex-flower uses large and small icons representing things such as a sighted vessel, trouble onboard the ship, signs of land, and more. The size of the icon represents the ship’s proximity to the encounter—large being closer and small being further away. The Weather and Nearby Planes Hex-Flowers are used to determine environmental conditions (with wind being an optional effect) and the proximity and influence of a nearby Plane on movement and encounters.

As the characters’ ship traverses the Astral Sea, players will need to manage their vessel’s “psychic load.” If they cannot keep it low or mask it, a Kear Imago will notice their psychic wake. The Kear Imago is a massive leviathan that swallows ships whole. It hunts tirelessly, attracted to power and passive emanations from sentient beings, magic, and the locus of psychic energies. Once detected, the Kear Imago begins to chase the ship in a cat and mouse game using the same Navigation Hex-Flower as the players. An encounter between the two occurs at the end of any Aperture (Day) in which the Kear Imago and ship co-occupy the same hex. Should the encounter result in the Kear Imago swallowing the ship, survivors must then navigate and escape the depths of the creature’s interior.

Navigating the Kear Dungeon is wholly different than traveling on the Astral Sea. While still using fixed directional movement, its hex-flower is not a map but rather an engine to simulate traveling in the corporeal substance of the Imago. Like on the Astral Sea, Movement uses the Navigation Hex-Flower and Nudging rules. Points used for Nudging are specific to this dungeon environment and are awarded for significant interactions with the dungeon.

The dungeon is home to various frightful creatures, some actively pursuing the ship, while others passively bide their time until encountered. Each of the seventeen dungeon areas is given a basic description on which the Referee is encouraged to further flesh out. A series of optional tables provide Referees with set dressing to further bring the dungeon to life along with traps and non-player characters (NPCs) to encounter. While small in number, these optional tables provide lots of details that can be randomly rolled or cherrypicked to good effect.

Referees will note that the dungeon does not provide for balanced encounters in some aspects. Meaning it is not balanced and character level (4+) is not merely a suggestion but a starting point. Characters will face challenging situations, that’s for sure, and it could quickly turn into a death trap. I guess that’s the risk one takes if one gets swallowed by a Kear Imago. Ultimately, escaping this deadly dungeon means navigating to the brain region of the Kear Imago—destroy the brain, beat the dungeon.

Issue Two arrived as a dense saddle-stitched zine. This issue has a higher page count, is in full color throughout, and comes wrapped in a beautiful full-color wrap-around cover. This issue features artwork by Chris Downey and Mike Lake; most in full color though a few are in black and white. There is also a nice two-page comic spread, which I hope to see more of in future issues.

It is worth noting, much of the artwork depicting individual hexes used in the various hex-flowers are very dark in color. While thematically appropriate to the setting, it wasn’t easy to make out some details. There is also a heavy reliance on red text in the body copy to call readers’ attention to specific information. I have concerns that readers with any degree of red-green (deuteranopia or protanopia) or blue-yellow (tritanomaly or tritanopia) color blindness will struggle. Depending on the severity, they may struggle to make out details in the small images or the hex-flower itself. Furthermore, the red text denoting specific information may blend in with the surrounding copy.

The beauty of the total package is diminished to some extent by what I see and feel is a poorly executed layout. I am not a graphic designer, and laying out books is not something I have ever done. However, when my attention is drawn away from the text toward a glaring visual “thing,” I have concerns about its aesthetics. The most visually jarring elements include:

I get the sense that the layout artist who has plenty of credits to their name and Planar Compass may have been trying to be a little Avant-garde with this issue. Or perhaps, Planar Compass took a hands-off approach in managing the overall layout. Either way, I think they missed the mark aesthetically.

All told, this issue nicely presents the rules and tools, and sources of adventure. The Kear Dungeon screams Moby Dick, and it would not surprise me if that were a source of influence. However, the arrangement of the sections baffles me, as it seems oddly arranged, giving it a disjointed feeling. For example, why are monsters presented first, before ships and navigation rules? I think it would feel more organic, flowing better had it been arranged differently.

I won’t mince words regarding my thoughts on the layout. I am not a fan of this issue’s layout. Poorly executed, jarring, and aesthetically unappealing, which is a shame, given the totality of the contents is wonderful. Although purely speculation on my part, had there been more direction and input given, it could have been cleaner, easier to read, and possibly decreased the page count slightly. I encourage readers to seek out the publisher’s pictures of the interior spreads to see if the layout is offputting or something you are willing to accept.

Taking the complete zine into consideration, it is a solid second issue. Expanding what began in Issue One, owners of Issue One should seek out this issue. There are many great tools and loads of usable content in Issue Two for those new to Planar Compass, but you will need Issue One. There are countless hours of adventure within, and as the nexus of multidimensional travel, the Astral Sea plays an essential role in planar travel.

Now that Issue Three has been announced and a new array of writers and artists will make their mark on the zine, I look forward to seeing what it adds to the growing lineup of Planar Compass!

We hope you enjoyed this article. Our mission is simple: to provide our readers with well-written articles and reviews that inform, promote, and improve the gaming community as a whole. We’re able to do this through the support of our patrons. If you’d like to become a patron and support our work, click the Patreon banner above to learn more.